Reporter: RobertBColton  |  Status: closed  |  Last Modified: August 06, 2020, 07:50:17 AM
This fixes an issue with emake's drag and drop conversion that was causing argument_relative not to be assigned correctly. It specifically was making TKG's Key to Success game have collision bugs when run from emake. The problem was that JDI has a setting to treat = assignment as == comparison like old GM, which interferes with the behavior of the converted drag and drop code. LGM plugin solved this problem by using the := assignment operator, but everybody on Discord pushed me to just make it its own separate statement so it's more human-readable. With this change, TKG's Key to Success works perfectly from the command line.

JoshDreamland   May 07, 2020, 07:55:48 PM
This also has the possibility to introduce regressions. Does Key to Success feature a "Question" action that is relative? You might have broken them.

RobertBColton   May 07, 2020, 08:22:43 PM
We don't have drag and drop tests yet, no, but they are needed. This change does not need to be made to LGM's action generator, no, because it uses the := assignment operator from GML, because the author knew well enough that JDI converts = to == in parentheses. That was the mistake I made, I didn't understand why := was being used in lgmplugin, and thought it looked silly.

I don't know about your first question, but I did test Key to Success against this and this makes it work the same as LGM.

JoshDreamland   May 07, 2020, 10:08:46 PM
IIRC, the result of an action_if_* function is used directly in an if-statement when emitting code. That's why we inlined the assignment. I am asking you if you've tested with any of those. I doubt Sam happens to be using a DND if with argument_relative.

RobertBColton   May 07, 2020, 10:22:36 PM
I still don't know the answer to that, but I do believe it was specifically a question action broken in his game. Also, while lgmplugin used the result inline, emake uses the __if__ fix for "applies to" fix like GMS. The lgmplugin actually still needs that fix, however I've found issues with it IIRC which is why it's not yet merged into the plugin.

RobertBColton   August 06, 2020, 07:48:35 AM
@JoshDreamland I had to double check what you were saying here and I couldn't find it to be the case. I don't think I originally understood you but I do now in that you were concerned any of the action_if question actions take argument_relative as a first parameter instead of using the global argument_relative variable. I could not find a single action if function in ENIGMA that has relative as its first parameter, so that could have just been a mistake in the original LGM plugin I copied over. 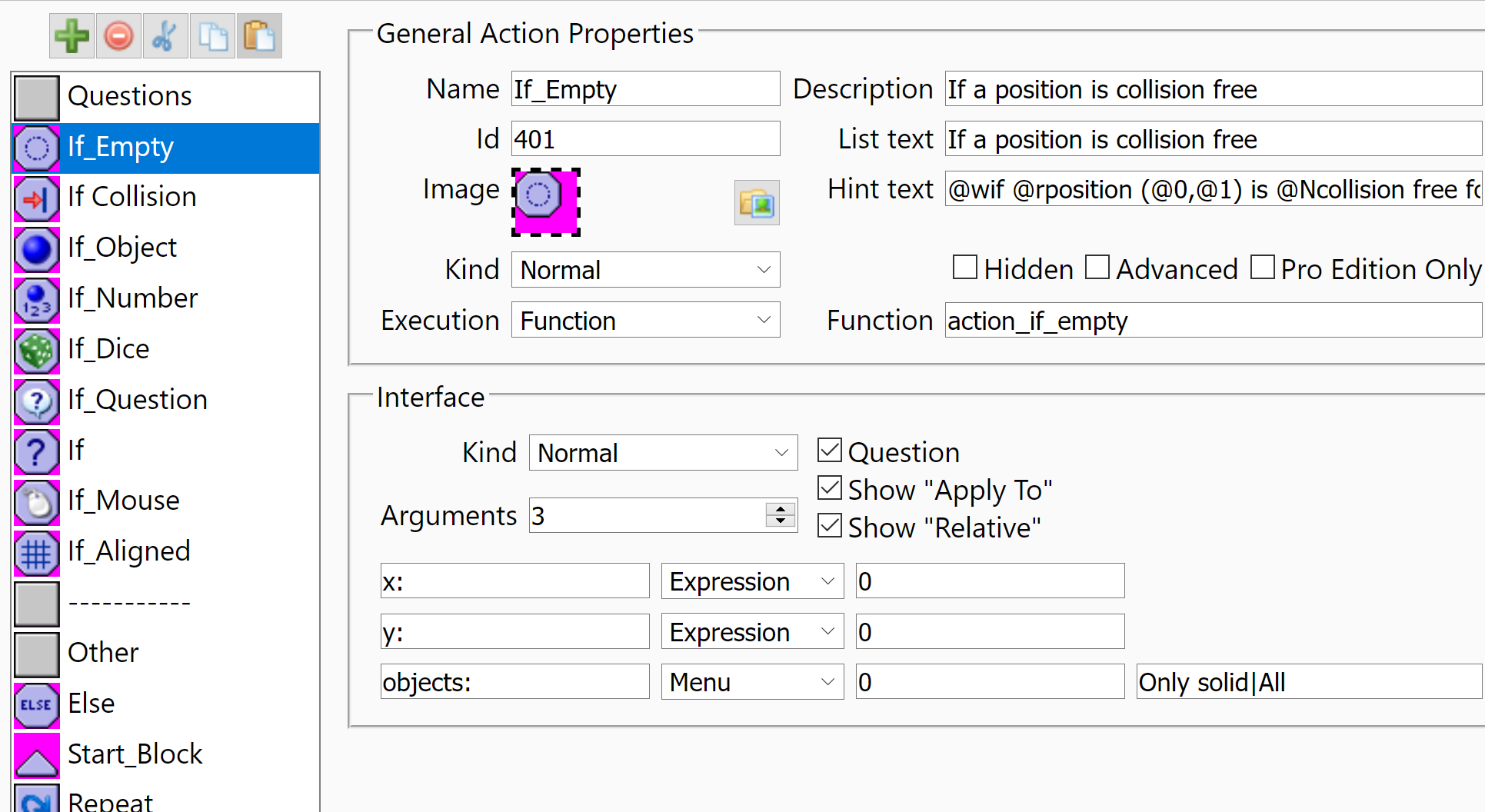 Also if we inspect the conversion code some more, we see the function name/call was inside the parentheses after where the assignment I removed was.

So really I think you just misread and this should be fine. Although, we could/should further clean that up maybe to not even use parens there since we use __if__ now. I agree it needs tests because I'm almost certain somebody is going to break it.