Reporter: time-killer-games  |  Status: open  |  Last Modified: May 03, 2020, 02:39:33 PM
@RobertBColton This code is currently broken and I don't know how to get this fully working after more than 48 hours of writing and debugging it. I figured it's better to leave this pull request up for someone else to mess with than to trash all the work I've done. Hopefully someone with Windows experience, like Robert, or to some lesser extent, Josh and fundies, might be willing to finish this. All I know is, even Josh and fundies who rarely use Windows are probably much more likely to get this working than I am. You guys do what you want with this; I hope I didn't waste my time working on it.

Note the current highscore table that renders to the game window should be moved to Widgets = None, as suggested by fundies. If someone completes this I will be able to then copy the coding logic they used and adapt it to an XLib version, so we will have all our supported platforms covered. 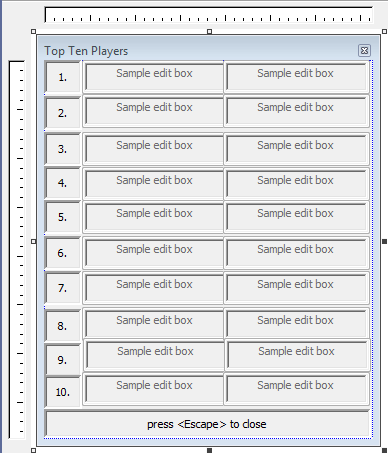 time-killer-games   April 19, 2020, 03:16:22 PM
@RobertBColton if you ever decide to finish this pr from where I left off, it's up to you, but if you do I have some documentation on what I've currently written provided below: