« on: October 24, 2013, 01:53:17 PM »
As for the new compiler it is going to get done you guys, and Harri, yes Josh has mostly been done with it but he is just trying to finish school, but we definitely need it for mobile ports and stuff, when he is free of school it will most surely be done. I get just as irritated with him being so slow, but then again I don't have anything else to do so that equates to my large amount of contributions all the time.
2252

« on: October 24, 2013, 01:43:25 PM »
Harri, it is exactly what I don't get either. The size of OpenGL compared to Direct3D though, yes D3D is that small, it is not as unfinished, it has sprites, backgrounds, surfaces, models, it isn't missing that much, our graphics systems are relatively small in size anyway I wouldn't equate the size of OpenGL to be such a large jump in executable size. Harri, and Direct3D is also not better than OpenGL because of this, you are forgetting that the Direct3D 9.0 End User Runtime has to be installed before these applications can even run.

However, Direct3D still runs faster for me on Windows, and it is also nicer switching between hardware and software vertex processing in a single function call. DirectX comes with a lot of things to such as all kinds of good image support including .bmp, .dds, .dib, .hdr, .jpg, .pfm, .png, .ppm, and .tga

It is actually designed specifically for games, where as OpenGL is meant to have other purposes. I've realized not to compare the two.

We don't Harri because each extension has its makefile which links those libs, if you look at SHELL makefile you can see it only includes those makefiles when the extension is enabled so if the makefile aint included and the libs aren't linked that tells us for sure that wildcard is never processed. Now it might be happening with the include.h files, but I am not sure, you'd have to try to remove one from a deselected extension and compile, then you'd know it wasn't included.
2253

Works in Progress / Re: Son of Blagger - remake

« on: October 24, 2013, 12:15:25 AM »
Okee dokee then great, it is looking to be a problem with your graphics hardware then. Just try updating your drivers and stuff to see if you can get better OpenGL support until we finish up our Direct3D more.
2256

« on: October 23, 2013, 11:50:42 PM »
This is probably exactly why, our Direct3D graphics are not nearly as finished yet, and Windows XP, well back then OpenGL was not as widely supported as it is today. As our Direct3D graphics system progresses though that game will eventually work with it. But this is most likely looking to be graphics related. But I don't understand why you can run the OpenGL game but not build it only a few of them.

Try this one as well, the version called Direct3D 9. It would also help if you could run all 4 and tell me the performance, RAM, CPU, and FPS of each version. Usually people report the 3 ENIGMA ones all if not at least 1 to be faster than the one compiled with the YoYoGames compiler.
https://www.dropbox.com/s/y914dam38fhtsi5/CUBES.zip
2257

Do you have any other compilers installed such as Code::Blocks or Visual Studio?

It would also help if you could open settings.ini and set closecmd=0 and screen cap that when you launch ENIGMA so I can see what your environment path is, or just navigate to control panel and http://www.pastebin.com it for me.

Edit: Also, what was the operating system on your computer before you installed Windows 7? It could be an issue with OpenGL or graphics or something. If you could do a DirectX Diagnosis and also pastebin those results that would be awesome.

« on: October 23, 2013, 11:25:09 PM »
Then it wasn't eliminated, just swept under the rug and you may also have a corrupted registry according to Google. Again, try the exe I linked and if that doesn't work then it is definitely your Windows installation.

Dll exists and and i fixed this problem.

That is just the thing, I don't trust where you got the dll from, it may be incompatible with your architecture you have installed. You said 64bit Windows 7 right? Tell me exactly where you got that dll to patch the problem it may be an actual issue with the dll.

Edit: I just tested it myself and it was able to successfully compile and run... Please run the game and then screencap what happens and upload to http://www.tinypic.com or elsewhere. If my built executable crashes for you then we know there is a problem with your Windows installation, I can help you find a better torrent specifically the one I used and a virus free activator for 7.
2262

I used a clean virus free torrent to reinstall Windows with my app key after coming back from Linux, make sure you virus scan any torrents.
2263

« on: October 23, 2013, 10:54:04 PM »
The file you just linked contains viruses as well as the website it was uploaded to. I can't even find the proper download, and propsys.dll is an internal DLL of Windows since XP, so it is most likely the result of wherever you downloaded Windows from.
2264 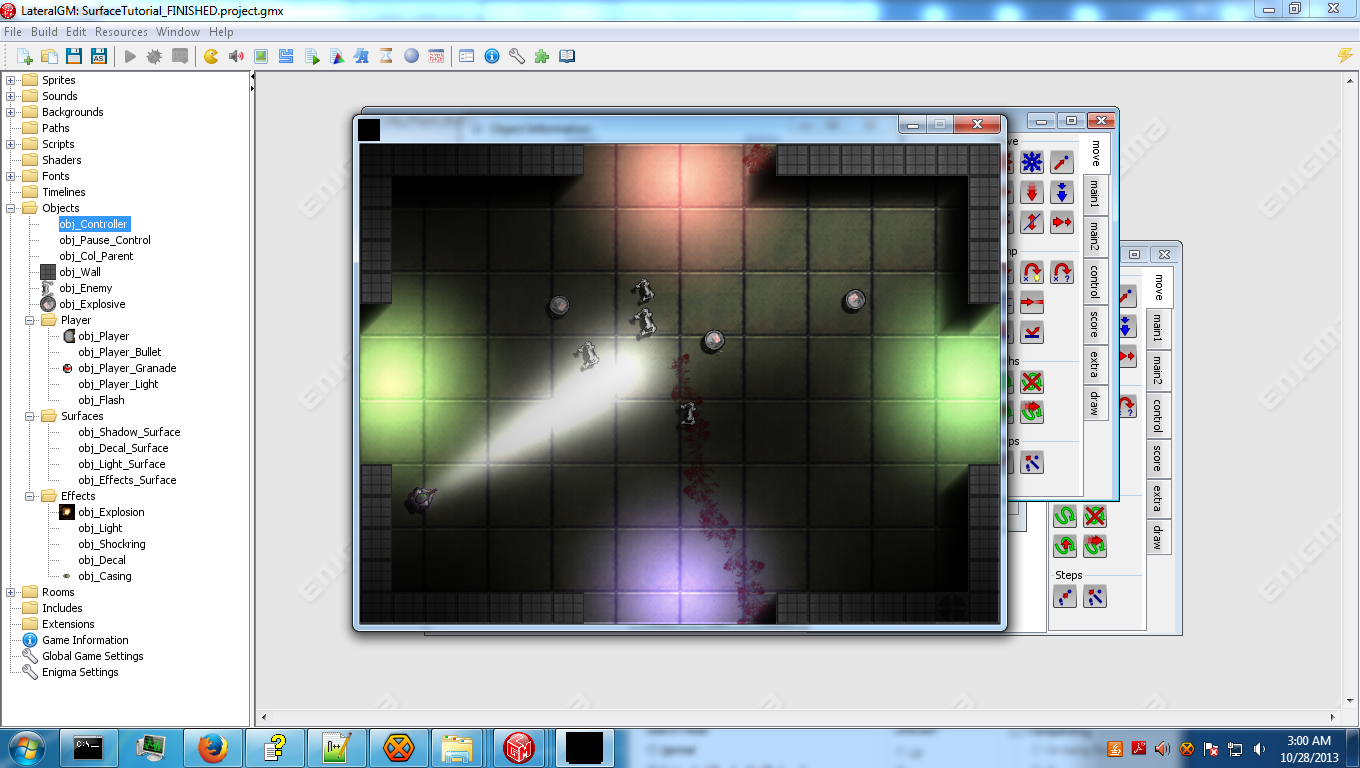 Because of inheritance I was able to get the following Studio tutorial working, with a slight modification to two for statements because none of them know how to program.

That is right I have implemented full object inheritance and polymorphism to the compiler, even the event_inherited() function and the corresponding drag and drop tile. There is a setting now added to Build->Settings where you can completely disable inheritance if you, for instance, like cheeseboy, you only want inheritance for collisions and nothing else.

You can also see settings there for my angular unit and scalar types, the options don't do anything quite yet they are implemented in the engine the setting is just hidden away I have to do something else first before I make the options work.

Compatibility should improve a lot now. You must update LateralGM and the plugin if you update from git or vice versa because a modification was made to allow the YAML settings layout to parse checkboxes. At any rate, enjoy!
2265