« on: December 29, 2013, 02:39:59 AM »
So this recently caught my eye while doing some GTA stuff. Rockstar is releasing some behind the scenes stuff of their ports of the III Trilogy to Android/iOS and the development that went into the original games in the 3D universe. The series is also titled "The Lab"

YYG so coyishly named their GTA 2D experiment project and other projects under "YoYoLabs"
http://www.yoyogames.com/developers/yoyolabs
2042

Mutations according to modern science clearly suggest nothing positive. If you think a goat born with five legs is proof of anything remotely close to a positive mutation, please also consider if that goat gets fucked by a she-goat I can garentee the baby goat will have four legs. What about that guy(s) in Asia born with two heads? Both heads have a wife now, and their kids have one head.

Where is this quote from? Because it is entirely wrong, natural selection is certain genes/mutations being favored over other ones, which therefore categorizes them as "positive"; a goat growing a 5th leg is not a positive/dominant trait unless it gives an evolutionary advantage.
2043 Okay, every version of Christianity (Catholics, Protestants, Jews, Mormans, etc) all believe they are going to heaven

Not only do they believe that, but they also believe almost the same religion verbatim, do you know Mohammed? He is the son of Noah... that's right, the same Noah from the Christian Bible who built the ark.

This is still one major thing I can not get across to my grandmother. The only major world religion that is truly fundamentally different is Buddhism.

There are some pretty retarded scientists too though, take for instance Eugenics. We were doing it before the Nazi's were, where do you think Hitler got all the ideas? Not only that but when we captured Nazi scientists and other people, we didn't torture them like we do today like at Abu Ghraib where the U.S. Army tortured the prisoners from the war in Afghanistan.
http://en.wikipedia.org/wiki/Abu_Ghraib_torture_and_prisoner_abuse

We gave them huge state dinners and what not to get information out them, but people who helped us fight the Nazi's such as Alan Turring, the father of modern computing. He wrote the ENIGMA machine which helped decrypt thousands of intercepted Nazi communications. We castrated him because he was gay, that is right...
http://en.wikipedia.org/wiki/Alan_Turing

The British are going through a whole round of apologies regarding what they did to him in the news right now.
http://www.youtube.com/watch?v=5kg91IdWrGQ

3) Proof of both a higher deity and the conflicting lack there of.

You can't prove god doesn't exist though, he just most certainly isn't a white bearded person in the sky. From what I can tell religion is really just a method of humans organizing themselves, like governments kind of, though historically government and religion have always been at odds with each other. Kind of like ants or how birds flock together you know? They not only move so precisely but they all move at the same time! How do they do that? Well we don't know quite yet...

Seriously, how do they all up and decide at one time in a split second, that they are all going to move at the same time? That is amazing!

Another interesting thing to consider is also the hard problem of consciousness.
http://en.wikipedia.org/wiki/Hard_problem_of_consciousness

If I am made up of all the same things as a desk or my house, how is it that I can feel things but the desk can't when I make a scratch in it? If I made a really advanced robot that could imitate humans so well you wouldn't know the difference, would it actually have feelings? I could make the robot "pretend" that it feels, but would it really feel? This goes back to "I think, therefore, I am"

What if I make an exact replica of you, down to the exact super position of every single atom, and stood both of you side by side, which one is the real you?
2046

« on: December 27, 2013, 10:28:24 AM »
Yes like I said the problem is not ours it is GNU Make/Makefiles not liking spaces, you can't escape them either, there is literally no way to use paths with spaces in a Makefile. At any rate, someone should probably change that in there to permanently be root/ProgramData/ENIGMA

They go back to the default. How do I avoid this?

That is because you are saving in the GMK format which we can not change the specification of. We have our own format called EGM, use that format instead, just be aware it does not save timelines.

//now for the next 2 inputs
else if (global.fireball_motion <= 2)And in places like that, remove the space and comment. Just try cleaning up the syntax.
2047

You didn't do anything wrong at all and neither did we, GNU make can't handle spaces in the path for the makefiles. As you can see here...
Quote

Anyway, this is only for XP now I guess because that is where %ALLUSERS% environment variable points to on XP, but lucky for you I can fix it. Close everything with ENGIMA, and then navigate to...
Quote

And open the file. Change line #19 to something like this...
Quote

Or just something without spaces. Then reopen ENIGMA and give it a second to rebuild the compiler and then give it another go.
2048

« on: December 22, 2013, 05:38:15 PM »
The IDE is actually Qt you can tell just by looking at it. If you read Marks blog and look at the source for monkey you'll see there are a lot of (*.bmx) or BlitzMax files, that is because Monkey is written with Mark's programming language. It would be like us writing LGM in ENIGMA.

« on: December 21, 2013, 06:08:03 PM »
Well I not that long ago posted about the new Monkey X which is the future of BlitzBasic and how awesomesauce I thought their Qt IDE and everything was for such a good price. Well I recently found out The Game Creator's (I really hate these bastards, worse than YYG) have come up with the App Game Kit to compete with Monkey X. And what did they decide to do for an IDE? They forked Code::Blocks and added plugins to make it hook up to their compiler and support the project formats. 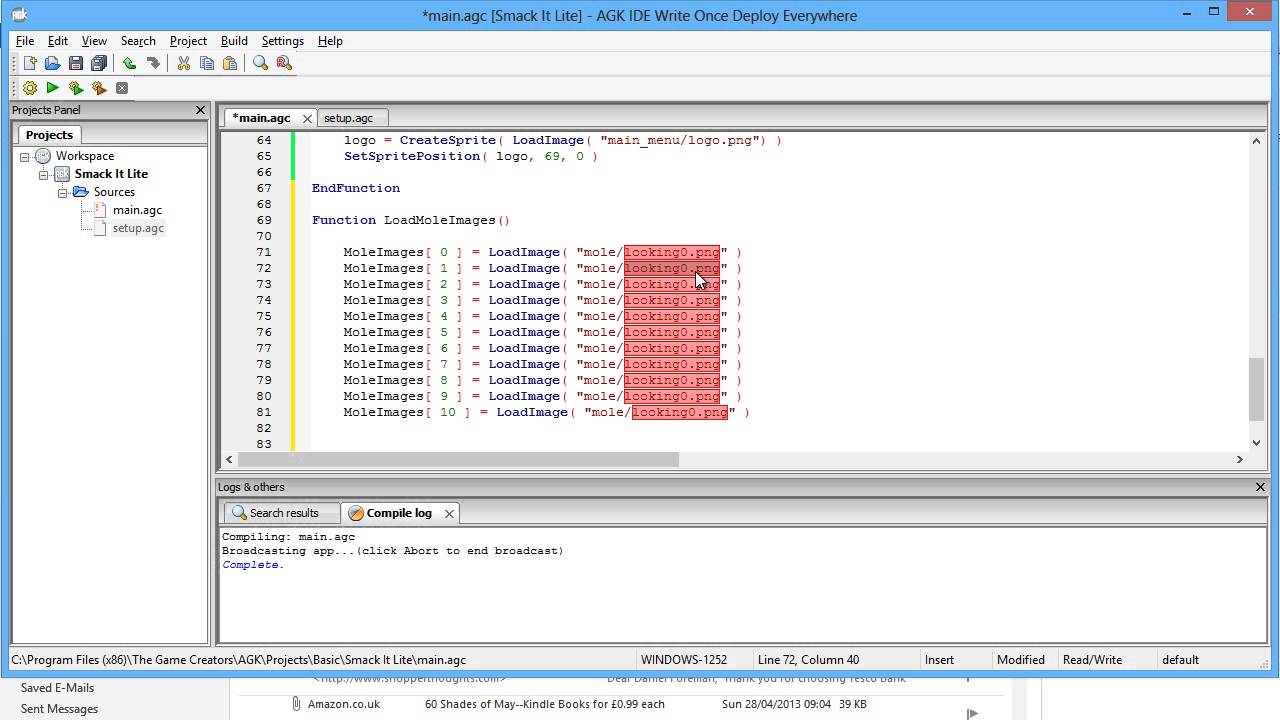 I have to say I am really rather intrigued by this, and a few us were discussing a GMK/GMX plugin for the Code::Blocks project before as well. Starting to think it might be a lot more plausible than previously presumed. After all, Unity game engine does use MonoDevelop.

PS: For the record, I do not condone purchases of any TGC software.
2050

« on: December 21, 2013, 06:01:10 PM »
Ok good daz, working on it, what we also need is other developers to agree to communicate as well. I would also like to say too that part of this also does fall on our users, when reporting bugs it is also very very good if people thoroughly document bug reports, provide examples, etc.
2052

Off-Topic / Re: Why are Mobile Games Shit?

« on: December 21, 2013, 06:00:04 PM »
I am adamantly advocating people switching to Unity2D or any other game engine, what other game developers are doing is truly revolutionary, most of game makers graphics is designed around the old fixed function pipeline and everything. And ofc my posts about GM and its automagic optimizations, you know it can only go so far, what Studio is, is basically putting some wheels on a turd and calling it a mustang. But basically GM is out of date in a lot of ways, no matter how hard they try to bring it into the modern era, it just wasn't designed for optimized game development. Unity is new like a lot of other game engines, it doesn't come from the Windows 95 era of programming, these new game engines are built from the ground up with new and modern game design in mind.
2053

« on: December 21, 2013, 01:53:44 PM »
I recently stumbled upon Haxe which is cross-platform programming language with a syntax style similar to JavaScript.

Multiplatform
Haxe can be compiled to all popular programming platforms with its fast compiler – JavaScript, Flash, NekoVM, PHP, C++, C# and Java – which means your apps will support all popular mobile devices, such as iOS, Android, BlackBerry and more.

Open Source
Haxe is open source and free to use. It has the right formula to become the next industry standard and is already garnering many adopters in the coding community whom we’d like to fondly call, the Haxers!

« on: December 21, 2013, 01:01:18 PM »
Due to recent criticism I am going to open a topic for everyone to criticize my development habits. My retort to these criticisms so far is just because I am in favor of more rapid development, doesn't make me horribly inexperienced for running a software development project or rather in this case having a large say in its development.

First I would like to introduce you to the rapid development strategy known as DevOps.
http://en.wikipedia.org/wiki/DevOps

It basically stresses good communication between developers, testers, and project leaders. Without good communication we end up with incidents such as polygonz merging a commit without communicating it to another developer such as myself which I always request or it undergoing any quality assurance.

Now this is where I mainly want to retort IsmAvatar in that I do not agree with full blown unmonitored contributions. Many people have heard me complain about Canonical releasing bugged updates constantly, and is also one of the main reasons I currently will not use Linux.

Basically when the cycle is working as is intended we end up with the following results.