« on: May 17, 2014, 07:56:20 AM »
I've recently updated ENIGMA after hearing about the last of the inheritance issues getting sorted. I'll list in order of testing as I do, going through the render options etc.

The first two issues I pointed out in my last post still occur. To elaborate more, on Direct3D9, for some reason the enemies that drop down from the screen fly back up again. They also do not fly down when they should rotate to angle *270 and leave, but this bit happens regardless of render choice. Regarding the alpha, the player ship when invulnerable has an alpha effect where it fades to 0 and then fades to 1 somewhat rapidly. In GM8.0 and when using DirectX9, this behaves fine. Under OpenGL however it is sporadic, suddenly becoming fully opaque after fading to 0.

The text offset I spotted in my last post is still present, apart from this fullscreen in all renders seems to be broken. I get my game's 240x320 box in some corner of the screen and not scaled across at all whatsoever. Aside from this things seem to be rendering fine, no weird colours like I got some time ago.

I've also narrowed down the collision issue I noticed before. It seems if I use a "with other instance_destroy();" in example object A when colliding with example object B, it takes priority over the example object B's own collision event but ONLY when object A is not moving. In the case of Warbird, obj_warbird_shot is losing its aesthetic effect because it's being terminated by obj_enemytarget. Not exactly my brightest hour of programming here but in GM8.0 this wasn't an issue.
17

The game now appears to work with all graphics renderers mostly okay with some exceptions:
- Alpha behaviour is not quite that of GM when in OpenGL, Direct3D9 behaves as intended
- obj_en1's vspeed inverts but does not trigger next phase when first appearing when running Direct3D9
- Direct3D9 will not show anything in fullscreen
- Direct3D11 will not show anything at all, but appears to be running normally otherwise
- DirectSound crashes the game, OpenAL works fine
- Text seems to be offset by some amount, in GM text is aligned but under ENIGMA the debug text is slightly outside the window and stage clear score text is offset.

In addition, some oddities I've discovered that are partially not-great coding but only show themselves under ENIGMA:
- Bullet collision with enemies aesthetically was not as intended, bullets simply disappear unless obj_en1 is just entering the screen, in GM obj_warbird_shot's collision with obj_enemytarget event takes priority over obj_enemytarget's collision with obj_warbird_shot.
- image_angle doesn't seem to correctly display at the right angle, or possibly is offset. obj_en1 is supposed to turn to 270 (south) and fly down, but gets stuck. In GM it works as intended.
18

« on: December 07, 2013, 03:33:04 AM »
Thanks for the support Robert. With that fix Warbird now appears to render correctly, or at least without that random black triangle.

Testing under the newest build (after successfully hitting update within git-bash.bat) I'm having some funny issues attempting to actually code anything. "Design" won't compile, anything using Direct3D won't compile, OpenGL3 hides anything with alpha < 1 and no matter what I edit within LateralGM the game acts like obj_ctrl_menu is present and taking me to rm_stage1 on keypress - even when I've deleted obj_ctrl_menu from within the IDE and saved the project as a separate file multiple times.
19

Clearly ENIGMA has taken several leaps forward since the last time I attempted to get Warbird working under it. I've recently redownloaded the ENIGMA portable installer and tested compiling with the GM8.0 Pro GMK (the original Game Maker port I did for it). The inputs problem was indeed a matter of inheritence: obj_warbird has its own shooting mechanism but movement was inherited from obj_player - no inheritence, no movement. Glad to see that not only has this been resolved but the matter of persistence between rooms appears to be working correctly as well.

With regard to core systems to use, using DirectSound for audio seems to always crash the program, but OpenAL worked fine with no modifications required on the project side. As for video choices, all rendering methods gave me this strange effect with backgrounds: In addition to that something seems a bit funny with inherited collision events, or possibly a thing with image_x/yscale. Either way, obj_en1 and obj_en2 inherit from obj_enemytarget. obj_warbird's shot, obj_warbird_shot, does not seem to create an explosion on contact with enemies but does appear to destroy itself anyway UNLESS the obj_en1s are still moving from on top of the screen. Bit confused there.

« on: August 07, 2013, 04:33:24 AM »
My apologies on thread placement. I'd thought that since the 3D Mario thing was in General Discussion this would fit next to it, guess not. Warbird's really only WIP in the sense that it's a single-stage demonstration - mainly intended for folks interested in my other project but getting lost in its complexity, the GM ports are essentially a "stripped down" version.

The sounds worked, or at least played, using OpenAL. My apologies on the terminology, I don't have any sound_effect functions used, just "SFX" like the player shot and enemy bullet shots play correctly. The one where the sounds played strangely I believe was actually the DirectSound system.

Being "stripped down" compared to my other project I'm also not using any extra trickery with the screen, so no screen_refresh() or screen_redraw() is being used.

As for version of ENIGMA, I did indeed use the Portable ZIP from the download page.

I don't suppose the older functions for GM8 will be supported eventually? I found legacy support of GM:Studio EXEs to be rather horrible, and not just in function support but in that running an old computer and trying to load a GM:Studio game just won't work at all.
21

« on: August 07, 2013, 03:55:17 AM »
Knowing that GMOSSE will probably never work in ENIGMA I've decided to test it with my small-scale project, Warbird. Here's a screenshot of the title screen below, inspired by the Oriental Soft Japan/Triangle Service title G-Stream G2020/DeltaZeal. 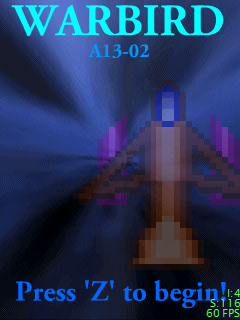 It started as a school project in Flash, where I wasted a year having half a dozen teachers try to teach us different "signature" flavours of ActionScript 3, and then have the assistant principal tell us Game Maker would've been allowed under the cirriculum requirements for passing the class anyway. Naturally I told him how much of a bludge the class was and that I could've run the entire class myself if he'd approved of it first, instead of filling half a dozen fill-in teachers' paychecks, by porting it to Game Maker 8.0 Pro within 30 minutes to make a point. As an added bonus, it serves as a nice starter for people scared of GMOSSE's large size but could do a little better on the "best coding practice" front.

Compatibility with ENIGMA isn't 100% at the moment but better than it's been in the past thanks to the efforts of Goombert and company. Listing the remaining problems below for documentation purposes:

- mp3 music is not supported but converting them to OGGs will yield playable music
- fonts are currently not working in RadialGM compiles as of 11-1-19 so no text display, LateralGM compiles will work but slight offset on text

The project's up on Bitbucket here, the downloads section has an option to download the entire repository but my experience putting binary downloads up on pastebin has been a mixed bag so no standalones for now. Included is ports to GM 8.0 Lite, GM 8.0 Pro (the original port), GM 8.1 Lite, GM:Studio 1.1 Free and the original Flash project.

Note: music's obviously pinched from G-Stream G2020 as placeholders, if you're gonna make a project based off this replace them first. Sound effects are mine, I don't care what happens to them.