« on: April 05, 2018, 03:06:41 pm »
@hpg678 It sounds like the issue was you didn't have any of the intended libraries installed on your original window manager. I'll contact the author of Tiny File Dialogs and see if he can tell me what specific libraries need to be installed.

It looks like that black on the game screen was because you tried dragging the dialogs - the same thing happens on Windows 7 with ENIGMA's default dialog system. As far as I know, there is no way around that, I'm sorry to say. Seems to be an issue with OpenGL and DirectX. On a newer OS like Windows 10 and Ubuntu 14.04 LTS this issue doesn't exist.

In any case, I added get_color_tfd(defcol) to the list of compatible functions. All that's left function-wise is show_error_tfd(str, abort).
108

« on: April 04, 2018, 11:26:24 pm »
Just wanted to announce that I talked with Josh and there seems to be a good chance this will become the new default widget system for Linux and Mac. That way, it won't be an extension, but a part of the actual engine.

Updated the code to (hopefully) support Mac. I will announce Mac is supported once someone has verified that it now works.
111

« on: March 30, 2018, 04:41:51 pm »
Some users were having trouble getting GTK+ dialogs to work on Mac and Linux, so I decided to create a quick solution to this problem, based on "Tiny File Dialogs" from SourceForge.net, which was licensed under zlib.

Note: currently only works on Mac and Linux. Will update the code soon, so that it will work on Windows as well, out of the box.

As you can see from the screenshots, this extension is also available for GameMaker Studio. It works the same in both.

Here's the progress I've made with the Windows version; (I can't publish it until a certain bug is fixed with MinGW):

What you see in the Windows screenshots above, was actually made with Microsoft's compiler, which is why it works in GMStudio but not ENIGMA yet.

All of pre-Studio GameMaker and GameMaker Studio's dialog functions are mirrored with the *_tfd() suffix.

Download here:
[link removed] Note: This ENIGMA extension is now it's own Widget System and is shipped with ENIGMA.

Extract that zip under this directory:
"[YourEnigmaFolder]/enigma-dev/ENIGMAsystem/SHELL/Universal_System/Extensions/"

Comes with an editable GM81 file and two Linux demo executables, (one for 32-bit and one for 64-bit).

To install all of your game's dependencies on Linux, along with the Linux dependencies that are needed to use this extension, use this terminal command: 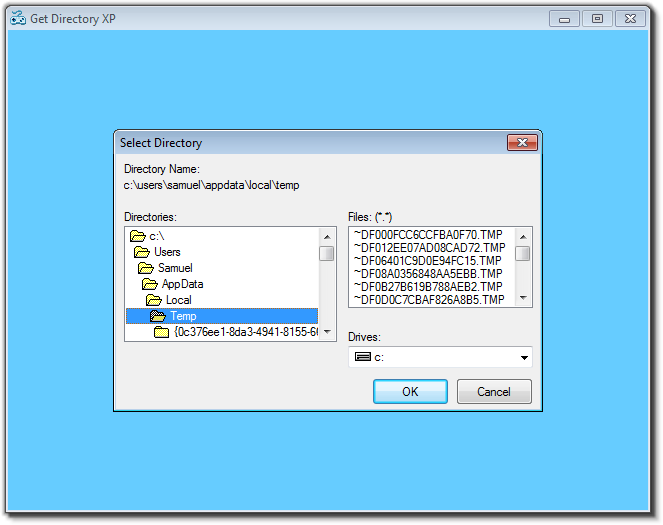 2) Extract the zip under:
"[YourEnimgaFolder]\enigma-dev\ENIGMAsystem\SHELL\Universal_System\Extensions\"

3) Make sure the path to the extension's files after extraction looks like this:
"[YourEnimgaFolder]\enigma-dev\ENIGMAsystem\SHELL\Universal_System\Extensions\GetDirectoryXP\[ExtensionFiles]"

This extension allows you to use the function get_directory_xp(dname), which is basically the same thing as get_directory(dname) in pre-Studio versions of GameMaker (v4.3 to v8.1 to be exact). This function asks for a directory. dname is the default name. If the user presses "Cancel" an empty string "" is returned. Supports UTF-8 encoding, unlike most of ENIGMA, for the moment. ENIGMA's current implementation of get_directory(dname) uses a much newer dialog, which only works on Windows Vista and upwards.

This will be added to ENIGMA's portable and on GitHub eventually, I just need to make a few minor adjustments, that will not effect how the extension works, such as adding copyright information in the code comments at the top of the source and header files.
113

I gave you the download for the GM 8.1 / ENIGMA version. That is why you are getting those errors.

Anyway, I just uploaded the GMStudio version, which is now available within the same zip / download link.
114

« on: March 02, 2018, 11:05:32 pm »
Thanks for your hard work! It works in both GM 8.1 and GameMaker Studio. I know because that is what I originally made it in, a version for each version of GameMaker. You just need to comment out and uncomment the specified code relative to which version of GameMaker you intend to use. I can send you the GMA if you want, but I don't see much point in it. The problem isn't to do with GameMaker, it is ENIGMA.
115

« on: March 01, 2018, 02:06:22 pm »
@Patrick - thanks for the idea, but unfortunately I know that's not the problem. The crash occurs not when I use draw_sprite_stretched(). That function works fine for me in the title screen. It happens when I am in 3D mode after I clicked "start new game". Both the 2D title screen and 3D gameplay use sprite_add(), so I'm guessing the real problem must be related to either sprite_get_texture() or d3d_draw_cylinder() which uses the texture as the panorama.
116

« on: February 23, 2018, 09:46:52 am »
Because I wanted people to be able to make and sell their own versions and arrangements of this extension, it is now 100% free, open source, and public doman. If you want to use this extension to create and sell your own ActiveX-based extensions, i.e. like described in my tutorial, obviously, you may do that as well.

Issues Help Desk / can someone tell me why this no longer works?