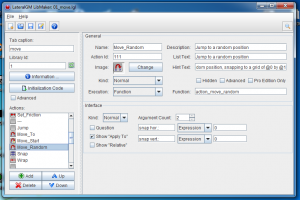 A Library Maker is any tool designed for creating and editing Libraries for Game Maker and/or LateralGM.

Generally, it deals with files of the following formats: LIB and LGL.

The latest JAR can be obtained from Install:Extra_Packages

We strongly recommend this version, as it is capable of reproducing all of the functionality of the official Library Maker, but has better support and more features.