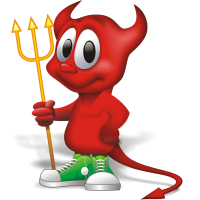 The official logo of FreeBSD based operating systems and environments.

For the sake of simplifying maintenance, we only officially support FreeBSD and its derivatives, out of the BSD distributions, since FreeBSD is largely the most popular among them. If you are new to FreeBSD and are confused by its complex installation process, we strongly recommend you download NomadBSD instead, which is based on the FreeBSD distro, therefore it is compatible with these instructions, and can be downloaded from the official website, (requires flash drive >= 5GB to install):

(NomadBSD allows you to select a default shell during its graphical installation;

make sure you change it to use bash, otherwise you'll be stuck with fish)...

(you should only need to do this ONCE on your system, even if you update or uninstall ENIGMA, however many times):

this will permanently DELETE your default 'make' executable and replace it with a symlink to 'gmake':

Please start a topic on the forums if you are unsure which dependencies your game needs.

ENIGMA can be downloaded and installed using the following commands:

You will also need the LateralGM and ENIGMA plugin binaries; they can be installed 1 of 3 ways.

1) You can install those automatically by running the install script in the enigma-dev folder:

3) Or you can obtain them manually per these instructions.