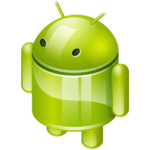 The official logo of Android.

This article is about the Android operating system and developing and publishing games for it. Android support is in early development. Many features are missing or broken and it has not been tested on many devices.

Setting up the toolchain

If you are not running a 64 bit version of Windows, you will need to value passed to --system. Likewise, change the paths to your corresponding NDK and toolchain paths. You may change the platform API level if you wish, and an additional flag --toolchain can be used to specify your desired Android target. The default is Arm, with GCC 4.6.

It is likely your folders are not setup the same way.

Setting up your game

Compiling for Android from another platform (such as Mac OSX or Linux) has not been tested but should be functionally similar to the setup for Windows. Install the SDK and NDK as described above and run the shell script to create the custom toolchain.

The Android project is in the early stages of development. Currently, the engine does not even fully compile